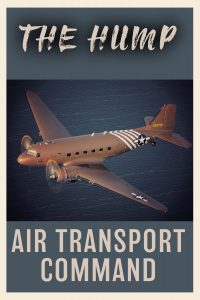 Transporting men, weapons, ammunition and supplies was a critical step in ensuring that the products of our arsenal of democracy reached the people who needed them most. And nowhere was that challenge more difficult than in the China-Burma-India Theater. The India-to-China supply route was longer than any other in the war and was operated for three and a half years from the spring of 1942 until the fall of 1945.

Central to that effort was the Curtiss C-46 Commando, a transport aircraft much like the more well-known C-47 Dakota, but with a pressurized cabin, higher altitude ceiling and superior cargo capacity.

Another transport aircraft critical to moving men and materiel for the Allies, principally during the second half of the war, was the C-54 Skymaster, Douglas Aircraft Company’s four-engine follow-on to the ubiquitous C-47. A military derivative of the civilian DC-4 airline, the Skymaster saw duty in both the European and Pacific Theaters between late 1942 and the end of the war. It went on to play a key role in the Berlin Airlift of 1948 and 1949.

More well known as a third-generation civilian airliner throughout the late 1940s and 1950s, the C-69 Constellation entered service as a military transport aircraft in the final months of World War II. This C-69 Constellation is perhaps more famous as the first aircraft to use the Air Force One call sign. Beginning in late 1952 until mid-1954, President Dwight D. Eisenhower used this very aircraft as his principal mode of aerial transportation. Mamie Eisenhower, the president’s wife, named the airplane “Columbine II” after the official state flower of Colorado, her adopted home state. The plane had been parked at an airport near Tucson for nearly 15 years before it was brought back to Virginia in early 2015 where it underwent a complete restoration.