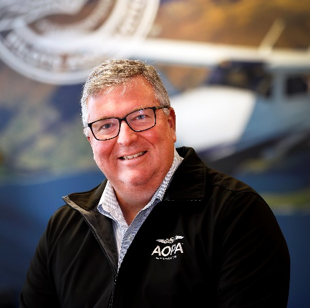 In June 2010, Mike Ginter retired from the U.S. Navy after serving 27 years.  He held several leadership positions including command of an S-3 squadron and operations officer of an aircraft carrier, and he completed 4 carrier deployments to the Persian Gulf and a NATO deployment to the North Atlantic.  Following retirement, Mike served 7 years in the civil service in the Pentagon as Chief of Staff and Deputy Director to the Deputy Assistant Secretary of Defense for Developmental Test and Evaluation.  In this position, Mike oversaw the growth and engagement of over 70 test engineers, analysts, and former test pilots in the preparation of critical test assessments of the largest defense acquisition programs like the F-35 Joint Strike Fighter, KC-46 Tanker, and Presidential aircraft.

Mike grew up in York, Pennsylvania and earned his pilot’s license as a high school senior.  He is a graduate of Embry-Riddle Aeronautical University and received his master’s degree from the National Defense University at Fort McNair, Washington, DC.  Mike is an active pilot and has logged over 500 carrier-based missions and 4900 flight hours in various military and general aviation aircraft during his 40-year flying career.  He holds a commercial certificate with instrument and multi-engine ratings.  He logged over 1000 hours in his 1943 T-6 Texan, owned a small business selling rides in the Texan, and is an active formation instructor and check pilot.  From 2016-2018, Mike served as the President of the North American Trainer Association and he has served on the Board of the Warrior Bonfire Program.

Mike and his wife Donna reside in Reston, Virginia and have 3 children and 3 grandchildren.