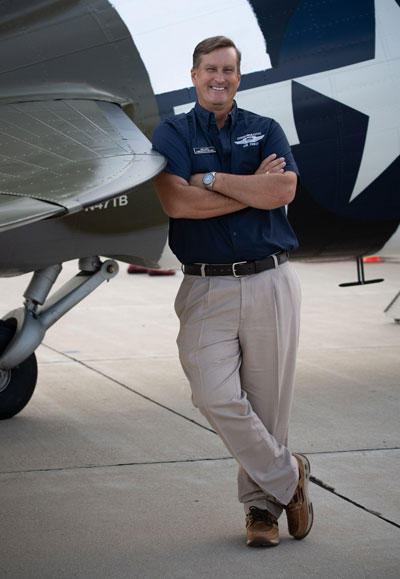 Hank Coates is the president and CEO of the Commemorative Air Force(CAF). He has over thirty-four years of professional experience, nearly twenty-three of which were spent in the service as a member of the US Navy. Hank attended officer candidate school and flight training in Pensacola, Florida. Upon earning his Wings of Gold, Hank spent his military career as a naval officer and aviator. He flew numerous aircraft throughout his tenure and spent two tours directing foreign military flight training. Hank also worked as a fixed wing flight instructor, as well as serving in the role of senior instructor for new flight instructors. He concluded his navy career while serving as Executive Officer at NAS Meridian.

Upon retiring from the Navy in 2008, he became the Director of Quality Assurance and Emergency Engineering Solutions at an industrial construction firm serving in the Gulf Coast oil and gas industry. He led his staff to implement a superior quality management system and enhanced vocational training. In 2012, Hank returned to the field of aviation to become the President of Aerosim AFA, a multi-million-dollar flight training operation. There he built a team that delivered world-class flight training to those seeking to become fully qualified, professional airline pilots. It was in this role that he became committed to attracting more people to the field of aviation.

The CAF owns and operates 170 vintage military aircraft which are cared for by 12,000 members in more than 80 unit locations within the United States and four foreign countries. The organization continues on its mission to Educate, Inspire, and Honor through living history experiences. Through Hank’s leadership the CAF continues to create innovative programming based around its fleet of World War II aircraft.

Hank is married to Bonnie Coates and they live in the Dallas area. They have two sons, currently attending Louisiana State University.