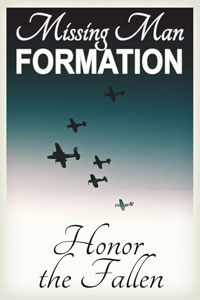 Over 12 million Americans answered the Nation’s call over the course of the Second World War. During the 45 months that the U.S. was involved, more than 400,000 servicemen would pay the ultimate price for freedom. Meeting death on the ground and in the skies over war-torn continents, or in the seas between them, the cost of ultimate victory must never be forgotten.

The Missing Man formation serves to remind us of those who sacrificed their future for that of our nation, and is a tradition which dates back to World War II. The symbolic moment when a single aircraft breaks formation and soars skyward, leaving behind his comrades-in-arms.