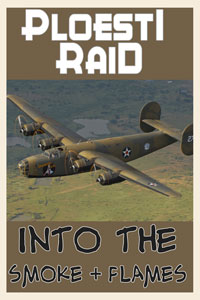 Into the Smoke and Flames

Officially known as Operation Tidal Wave – the Ploesti Raid was organized targeting Romanian oil refinery complexes around the town of Ploesti which was a major center for the production of Axis petroleum products being used in the war. It was thought that if a sizable force of bombers could fly to Romania from an Allied base – that their bombs could disrupt oil production and bring the war to a more expedient end. The attack was deemed unsuccessful because it lead to no curtailment of overall product output, even though the refinery complexes were set ablaze and damaged by the raid. Raids on the complexes continued throughout the war, with varying degrees of success.

The most produced Heavy Bomber in history, the Consolidated B-24 Liberator was designed to improve upon the Boeing B-17. It could fly further, faster and carry more bombs than its predecessor, but in spite of this it never truly replaced the B-17, with both continuing in service until the end of the war. The B-24 was used in every theater of the war, and when plans were being drawn up for Operation Tidal Wave B-24s were selected since they had the range to reach Romania from North Africa. 177 Liberators departed Libya – 88 would return, 55 of which had been battle damaged – 310 Airmen were killed during the mission. One B-24 returned to Libya with 365 bullet holes in the aircraft after flying a 14 hour round trip.