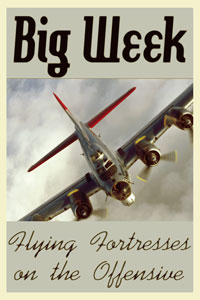 Flying the Fortresses on the Offensive

Formally known as Operation Argument, Big Week was planned as a series of attacks by allied strategic bombers flying from bases in England and Italy. It was intended to lay waste to the German aircraft production industry. The attack had almost no impact on the German aircraft factories and their production capabilities. The lasting impact of the Big Week was that the Luftwaffe’s aerial defense squadrons had been nearly neutralized by the new P-51 Mustang. Approximately 17% of the Luftwaffe’s trained defensive pilots were killed in a single week. Air superiority shifted to the Allies in February 1944, not because of destroyed factories, but because the Luftwaffe had a critical shortage of trained airmen.

An enduring symbol of the Strategic Air War over Europe the B-17 was designed in the pre-war years to fulfill an Army requirement for large multi-engine bombers. It was designed to carry a significant bomb-load but it was also thought that the bomber should be able to defend itself from attack. To accomplish this Boeing’s engineers continually added guns to the aircraft throughout the course of the war. Its solid appearance, bristling with Machine Guns lead a reporter to describe the airplane as a “Flying Fortress.” Boeing latched on to the phrase immediately – trade marking it and applying it to the aircraft. The airplane generally featured a crew of ten, with each man operating as a cog within a well-oiled war machine. During Big Week the 8th Air Force flying from England lost 97 B-17s. While that number seems high, losses during Big Week stood at under 7% per mission – where they had rested at 30% consistently prior to the advent of the P-51.