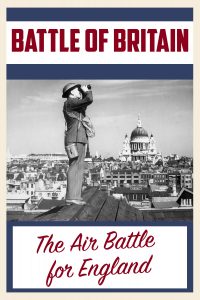 By the spring of 1940, the Germans had conquered virtually all of western Europe and were planning Operation Sea Lion, an amphibious invasion of Great Britain that Adolf Hitler believed would end Allied resistance in Western Europe. In preparation for that invasion, Hitler ordered the British Royal Air Force be neutralized.

Throughout the summer and early fall of 1940, the full might of the German air force was focused on destroying the Royal Air Force, demoralizing the British people, and completing the German defeat of Allied forces.

And these battles were fought at a time when the Arsenal of Democracy had only just begun to churn out weapons and armament and while the Royal Air Force still was using only those pilots who had been trained prior to the start of the war.

High in the skies over southern England, Supermarine Spitfire and Hawker Hurricane fighters like those that you see here engaged German aircraft in aerial battles that would, quite literally, determine the outcome of the war. And, after four months, the RAF prevailed, giving Germany its first major defeat of the war and prompting Hitler to indefinitely postpone his planned invasion of Great Britain.

In memorializing the effort of the Royal Air Force during those desperate days in the summer of 1940, British Prime Minister Winston Churchill famously observed that, “Never in the field of human conflict was so much owed by so many to so few.”