SINKING OF THE BISMARCK 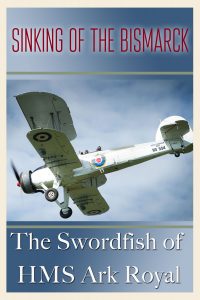 Beginning in the early 1930s, the Fairey Swordfish was operated principally by the Fleet Air Arm of the British Royal Navy, with some Swordfishes also flown by the Royal Air Force, the Royal Canadian Air Force and the Royal Netherlands Navy.

Although it was already obsolete by the beginning of the war in September of 1939, the biplane torpedo bomber saw frontline service throughout the Second World War.

In the early days of the war, the Swordfish played a major role in several important battles. In late May of 1940, Swordfish torpedo bombers operating from the decks of the British aircraft carrier HMS Ark Royal attacked and fatally crippled the legendary German battleship Bismarck during a multi-day battle in the North Atlantic west of France. Just a few months later during the Battle of Taranto in the Mediterranean Sea, Swordfishes operating from the aircraft carrier HMS Illustrious sank one Italian battleship and damaged two others.

By the end of the war, the Swordfish held the distinction of having caused the destruction of a greater tonnage of Axis shipping than any other Allied aircraft.